The Strategy for Social Inclusion of Roma in the Republic of Serbia 2016-2025 led to some progress in addressing the problem of discrimination against Roma. Nevertheless, difficulties have been encountered in overcoming prejudices and misperceptions about the Roma population. One of the obstacles is the lack of awareness of discrimination and the lack of knowledge of support mechanisms that could help discriminated people, as was highlighted in the panel discussion “Inform yourself and do not judge” held in Novi Sad, 08.09.2020 with the aim of raising awareness of the problem and encouraging adequate response and prevention.

The Ombudsman of the Province of Vojvodina, Prof. Dr. Zoran Pavlović, pointed out that in order to overcome all forms of discrimination against minorities, it is necessary for citizens to gain confidence in institutions and for the institutions, as public authorities, to realise that they are there for citizens. „It is important that we encourage citizens to turn to the authorities. In order to be able to seek appropriate protection, they must, above all, be aware of their own rights, know where to turn for assistance and know that there will be no lack of assistance in the event of a complaint for any form of discrimination, taking into account the procedures to be followed “, said Zoran Pavlović. 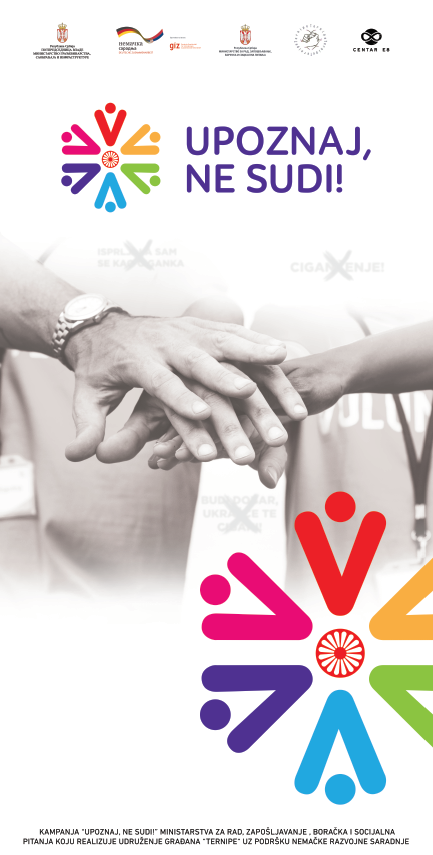 In order to raise awareness of discrimination against national minorities, the Ministry of Labour, Employment and Social Policy, in cooperation with the civic association Ternipe, launched the campaign “Inform yourself and do not judge”, which was supported by German Development Cooperation with the project “Inclusion of Roma and other disadvantaged groups”.

„The “Inform yourself and don’t judge” campaign includes panel discussions, numerous other activities such as the summer school for secondary school pupils, which is dedicated to combating discrimination, and numerous anti-discrimination activities in ten secondary schools. Short films were also recorded with the aim of getting to know the Roma population better and combating discrimination and stereotypes“, emphasised project manager Petar Antić during the panel discussion.

In addition to raising awareness of discrimination against members of national minorities and the ways in which it is manifested, the panel discussion highlighted the failure to report such cases to the competent authorities. The representative of the city of Novi Sad, Ljiljana Mihajlović, stated that in the past five years not a single Roma person had turned to the local ombudsman in Novi Sad.

Discrimination cases documented in the media exist and are an important source of information for all actors involved in preventing and combating discrimination and promoting human rights. Nevertheless, the reasons given for not dealing with certain cases of discrimination are the lack of complaints to the competent bodies and distrust of the institutions.

„The Roma community is mostly silent and suspicious of the authorities. They do not believe that their case would be dealt with if they filed a complaint, or do not react at all because they are afraid. The Alliance against Discrimination against Roma, a network comprising of eight Roma organisations from cities across Serbia, is an alliance that exclusively addresses the problems of discrimination. The other problem is the institutional discrimination that arises with regard to the collective rights of the Roma under the Law on Freedoms and Rights of National Minorities. The public authorities have not provided mechanisms to protect “otherness” and to ensure cultural autonomy and official language use, as is the case with other national minorities which have their own cultural institutes, newspaper publishers in their mother tongue and official language use even in those municipalities where there are no preconditions for it by law“, said Nenad Vladisavljev, representative of the Alliance against Discrimination against Roma.

Participants in the panel discussion concluded that education and knowledge of and trust in the rights, support mechanisms and assistance provided by the authorities are essential for overcoming and combating discrimination against national minorities.