|In Our Stories
|By 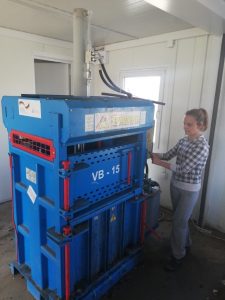 Kristina is 25 years old and lives in the village of Toljevac in the municipality of Varvarin in Serbia. Despite finishing school and a hairdressing course, she has not been able to find permanent employment.

Her father is unable to work as a result of an injury and her mother is seriously ill. In addition to the father’s pension and the grandmother’s minimum pension, the family’s only regular source of income is selling strawberries and other food they grow in their garden.

Kristina often worked as a seasonal worker at nearby farms to earn some money. Thanks to the support of the German federal government, she was now able to complete a specialist internship for waste separation in a public utility company in Varvarin. After a few months, the management decided to keep her in the company because of her diligent and dedicated work.

As part of the BMZ project “Modernization of Municipal Services”, bucket and containers for waste separation and a vehicle for waste collection were purchased for the municipal enterprise “JKP Varvarin” and a recycling center was built. This has created the conditions for the employment of at least six persons from vulnerable groups who sort plastics and cardboard boxes for recycling.

For Kristina, this new job is very valuable. Thanks to the regular income she can contribute to her family household.

Like many of her contemporaries, Kristina had previously thought about the idea of ​​seeking a better life abroad.

Nevertheless, she would rather stay in Serbia because of her family and friends. Now that she has a job, she feels better and is satisfied. She sees her perspective in Serbia.