A jubilee celebration was held on Republic Square in Belgrade to mark more than 20 years of German development cooperation in Serbia. The event was organized by the Embassy of the Federal Republic of Germany, Deutsche Gesellschaft für Internationale Zusammenarbeit (GIZ) GmbH and the German Development Bank (KfW). Visitors enjoyed a diverse cultural and artistic programme, and learned about the work of German development cooperation in Serbia over the past two decades.

Opening the official part of the programme, German ambassador Thomas Schieb greeted the audience, and said that the overall goal of the partnership is German support for Serbia on its path towards the European Union.

“The goal of all German projects in Serbia is to be good for Serbian society, to improve the quality of life and the environment and to create visions of a better future, especially in key areas: renewable energy, private sector development and the rule of law”, said Schieb. “It is especially important to point out the role of the German private sector – about 400 companies operate in Serbia, employing 75,000 workers, and bilateral trade is expected to reach 7.5 billion euros in 2022, which is 26 percent more than last year.”

Serbian Minister for European Integration Jadranka Joksimović also addressed the audience, remarking that cooperation with Germany is important, not only because of European integration but also because of other issues of vital importance. 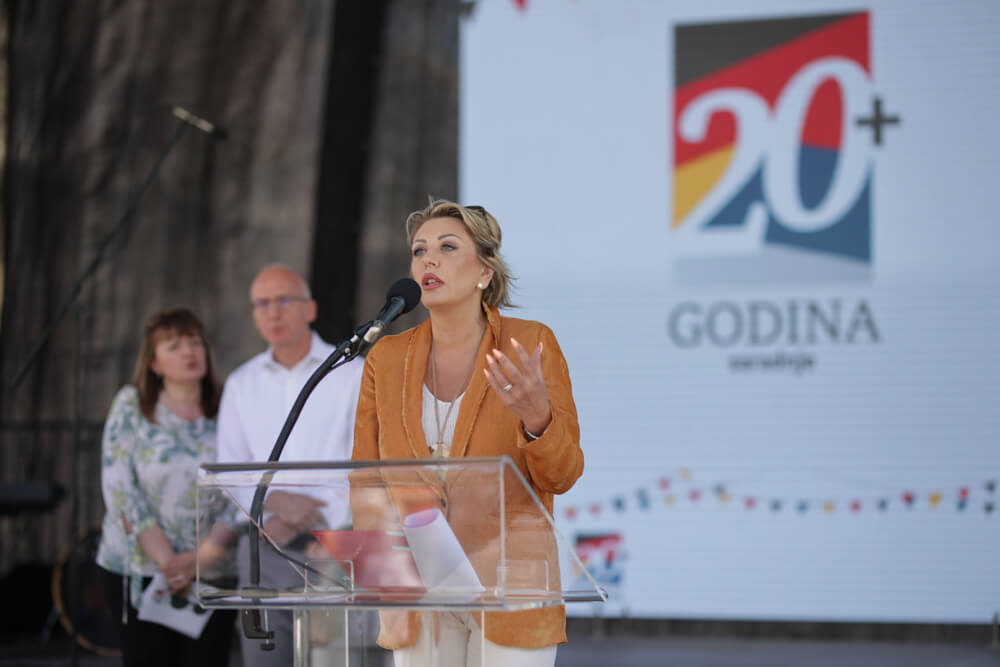 “It is of utmost importance that we have established permanent channels of communication at the highest level, political and economic ‘high frequency diplomacy’, because not only investment coming from Germany is important, but also the cooperation and grants we receive. Since energy stability is the greatest challenge today, Serbia has found a strategic partner in Germany in the field of the ‘green agenda’, of renewable energy sources and a sustainable future”, said Joksimović.

During the event, the film 20 Years of German Development Cooperation in Serbia was shown on the central stage – a retrospective of the most important projects that have marked long-term cooperation between the two countries. The film was followed by musical performances by the children’s ensemble Music of Hope, and by a student band from the German School in Belgrade. Following this, alumni of the German Academic Exchange Service DAAD presented their research works in an unusual way, and the audience had the opportunity to enjoy the music of German composers and popular songs performed by the Intermezzo string quartet. The end of the official part of the programme was all about fun and relaxation, with a musical selection by the famous Belgrade club duo – DJ Puki and DJ Pepe.

Besides the central part of the programme, visitors could participate in various interesting activities, such as a digital exhibition on LCD screens. This exhibition presented a virtual tour through the embassy of the Federal Republic of Germany, the startup project Futuring which, with the help of a virtual guide, brings a range of information about the history and the present of cooperation between Germany and Serbia. In the Children’s Corner, an art workshop on sustainable energy sources for preschool and lower primary school children was held, where the youngest visitors could draw, have fun, but also learn a lot about this topic. At special stands, guests had a chance to taste famous German sausages, to refresh themselves with Moritz Eis ice cream and enjoy sweets from Lidl, who sponsored this great event. There was also a mini fair in which German NGOs operating in Serbia presented their projects and current activities.