As part of the recent negotiations between the Serbian and German governments, the Parliamentary State Secretary at the German Federal Ministry for Economic Cooperation and Development (BMZ), Dr Maria Flachsbarth, together with her team, visited the German Information Centre for Migration, Vocational Training and Career (DIMAK), which operates within the National Employment Service of the Republic of Serbia (NES). The State Secretary was received by the Director of NES, Zoran Martinović, and representatives of GIZ in Serbia, with the participation of the Commissioner for Refugees and Migration in Serbia (KIRS), Vladimir Cucić.

„Migration is an issue that has connected Serbia and Germany for decades. Migrations have connected our two countries economically and culturally, and in that way created many links between them. But migration is also a complex issue. Above all, returnees need support to make a new start. I am glad that with DIMAK we have succeeded in creating a central contact point that develops support measures for returnees tailored to the needs of each of them. The very good cooperation with the National Employment Service and the Commissioner for Refugees and Migration shows how seriously Serbia takes this issue, and I hope that we will continue this close cooperation,” said State Secretary Dr Maria Flachsbarth.

In a direct conversation with the returnees, in which they described their life stories and the obstacles they face in improving their living conditions after returning to Serbia from Germany, the State Secretary encouraged them to continue using the services of DIMAK and thus, above all, to continue their education and acquire professional qualifications.

The Commissioner for Refugees and Migration in Serbia (KIRS), Vladimir Cucić, pointed out the good relations between Serbia and Germany, praised the cooperation with GIZ, and expressed his expectations for even more intensive cooperation in the future, as he expects migration to be a trend in the coming years.

The Director of the NES, Zoran Martinović, thanked the State Secretary for the significant technical and financial support that NES has received from BMZ and GIZ in recent years, and emphasised the very intensive cooperation with GIZ that has been established in recent years. He particularly highlighted the importance of support in digitalisation during the COVID-19 pandemic, during which the first virtual employment fair in the country was implemented with the support of the BMZ’s “Migration for Development” (PME) programme. He stressed the importance of a large number of trainings conducted jointly for returnees, the unemployed, but also for NES employees, as part of the necessary strengthening of the internal capacities of this institution. DIMAK cooperates with the NES Migration Service Centres throughout Serbia and since the new Employment Strategy of the Republic of Serbia foresees the strengthening of the existing centres and the creation of new ones in preparation for joining the EURES network, he hoped that, with the support of the BMZ and in cooperation with DIMAK “further work will be done on this plan,” Martinović said. 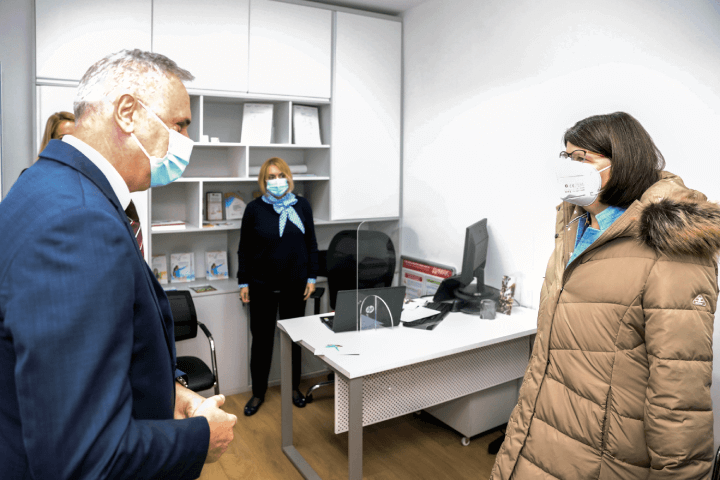 Marija Bogdanović, Head of the PME and PMD programmes in Serbia and Head of the DIMAK Centre, explained the Centre’s holistic approach to providing support: “All DIMAK services are free of charge and available to both returnees and vulnerable groups of the local population, and counselling is confidential and in line with GDPR rules. Whether an individual or the whole family calls, no one leaves DIMAK without having used at least one type of service, and we try to match the needs of users with their wishes. I would particularly like to emphasise the importance of the coordinated support we provide in obtaining foreign documents, which returnees often do not take with them due to procedures and lack of information, which prevents them from registering in a public registry in the Republic of Serbia, continuing medical treatment or enrolling their children in school.“

The BMZ programmes “Migration for Development” (PME) and “Migration and Diaspora” (PMD), implemented in Serbia by the Deutsche Gesellschaft für Internationale Zusammenarbeit (GIZ) GmbH through the DIMAK Centre, but also a number of other projects implemented in cooperation with the implementing partners – the Ministry of Labour, Employment, Veterans and Social Affairs (MoLEVSA), the National Employment Service (NES) and the Commissariat for Refugees and Migration (KIRS) – provide comprehensive support in the field of migration management in the Republic of Serbia, from return and (re)integration support to strengthening relations with the Serbian diaspora and advice at the level of developing migration management policy.