Peer-to-Peer dialogue and exchange in the area of labour migration between Serbia, Georgia and Germany delivered

A two-day peer-to-peer dialogue and exchange of experiences between governmental institutions of Serbia, Georgia and Germany in the area of labour migration was finalized in Belgrade, on September 7. The meeting was organised by the Programme “Migration and Diaspora” (PMD), implemented in Serbia by the Deutsche Gesellschaft fur Internationale Zusammenarbeit (GIZ) GmbH, in cooperation with national partners- Ministry of Labour, Employment, Veteran and Social Affairs, National Employment Service and Commissariat for Refugees and Migration of the Republic of Serbia.

Representatives of delegations coming from the relevant governmental stakeholder institutions discussed the situation and context of migration in all three countries in the view of the labour migration policy, data management and migration monitoring.

The meeting was virtually opened by Dennis Röntgen, refugee and migration consultant at the German Federal Ministry for Economic Cooperation and Development (BMZ), by pointing out that Serbia and Georgia were important partners of the Programme “Migration and Diaspora”. Both countries have been very committed to enhancing their migration governance policies and improving the status of migrants in their respective countries.

In his address, he stressed that labour and regular migration contributed to the development in target countries and that BMZ was committed to migration governance benefiting both the states and migrants.

Sandra Grujičić, Assistant Minister in the Ministry of Labour, Employment, Veteran and Social Affairs and Head of Serbian delegation, stated that labour migration was of major importance for managing and addressing challenges in the area of economic migration in Serbia. “It is very important to have an ongoing cooperation and coordination of activities between all relevant stakeholders in this area, same as opportunities for peer learning and presentation of examples of good practice, solutions and mechanisms that work in practice”, said Grujičić.

A current trend in Serbia is focused on reducing the departure of economically active population and attracting foreigners. As Grujičić pointed out, according to the data of licensed agencies (124 in Serbia) approximately 1,000 Serbian citizens had found jobs abroad in 2020, which was significantly less compared to the year before when ca. 6,500 Serbian citizens got employed abroad on average.  In the first eight months of 2021, 650 of our citizens had found jobs abroad, as demonstrated by the agencies’ data. On the other side, Grujičić explained, since 2014 when the new Law on Employment of Foreigners entered into force, in total 65,000 work permits were issued, primarily to the nationals of China, Russia, Turkey and Italy.

She stressed that economic migration was not a trait of highly skilled workers, but that it also included persons with lower education levels, or those possessing certain knowledge and skills. Reflecting on the Economic Migration Strategy 2021-2027, adopted at the end of January 2020, Grujičić pointed out that the fundamental objective of strategic documents in the area of economic migration was slowing down the departure of Serbian citizens abroad, but also stimulating the return of experts from the diaspora to the Republic of Serbia. The goal was to create a business and economic climate for arrival of foreign experts, and to propose new solutions to enhance legislation in the area of economic migration.

Nino Valtauri, director of the National Employment Agency in Georgia, addressed the attendees on behalf of the Georgian delegation by stating that the development of international cooperation in the area of circular labour migration was a long-term priority of the Georgian Government regulated under the respective legal framework, and that this meeting was an excellent opportunity to learn about good practices in this area. The process of economic migration per se implies people leaving from one country to another for the purpose of improving their economic prospects. A part of this migration type is circular migration- occasional and usually recurring movement of workers for the sake of employment.

Sanja Gavranović, Head of the Group for Normative, Administrative and Supervisory Affairs at the Sector for Labour and Employment in the Ministry of Labour, stressed the lack of records on the citizens leaving the country as one of the major challenges faced by Serbia in the migration domain. “A large number of citizens of the Republic of Serbia are leaving the country to work abroad at their own will, without using the services of licensed agencies or National Employment Service. They address governmental authorities only if specific problems arise and this is when the state usually learns about their leaving. As the state, and in particular as the Ministry of Labour, we are working on raising awareness of our citizens to prevent them from leaving at their own will, and this activity ought to be continued”, said Gavranović.

Speaking about the protection of Serbian citizens working abroad, she underlined that the Ministry of Labour concluded agreements on temporary employment with a basic aim to ensure the same rights to the citizens of Serbia as those enjoyed by the citizens of the state of their employment. “An additional value of these agreements is that owing to them, the state is able to collect information about the countries where the citizens are getting employment abroad, same about their number. Currently, Serbia has signed three such agreements, with ongoing negotiations with the Russian Federation expected to result in the signing of an agreement at the level of the Russian and Serbian Ministries of Labour. In addition, negotiations with Malta and Qatar are under way”, announced Gavranović.

Further emphasised was the importance of the Migration Service Centers established in Serbia by the National Employment Service, that provide information, advice and counselling to potential migrants, thus reducing the risk of irregular migration, by referring them to legal flows, valid procedures and opportunities for employment and studies abroad and in Serbia.

Serbian delegation was headed by the Ministry of Labour, Employment, Veteran and Social Affairs, while its members included representatives of the National Employment Service, Statistical Office of the Republic of Serbia, Migration Service Centers and Commissariat for Refugees and Migration. Georgian delegation was headed by the National Employment Agency. In addition, representatives of the Ministry of Internally Displaced Persons from the Occupied Territories, Labor, Health and Social Affairs of Georgia accompanied the joint delegation.

Under the PMD Programme, GIZ advises state institutions with a mandate in migration policy and administration in the technical field of migration governance. This includes focus topics of developmental relevance such as regular migration, diaspora, return and reintegration as well as improvement of data management and analysis. A major part of the Programme is focused on stimulating return of the highly skilled members of the Serbian diaspora via various open calls and financial support. 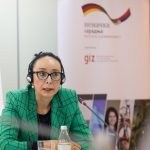 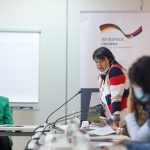 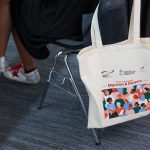 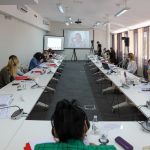