Sustainable municipal waste management, which is an inevitable part of everyday human activities, is of great importance for preservation of human health, the environment, and natural resources. This process, which is in competence of local self-government, has become necessary in all stages of urban development, from planning and construction to handling, disposal, recycling, and final decomposition.

Within the process of accession to the EU, Serbia has the obligation to reduce, by the agreed date of accession, quantities of biodegradable waste from municipal waste disposed of at landfills to 35% from the 2008 level. However, data from the Study of measuring quantities and composition of municipal waste from 2015 indicates that in Serbia biodegradable waste makes the predominant share of household waste – about 50%, with garden (green) waste taking up about 18.1%, while food waste makes about 31.4%. The quantity of biodegradable waste in Serbia amounts to more than 1.22 million tons, which corresponds to generation of about 170 kg of such waste per inhabitant a year. According to researches, primary separation (separate collection of different types of waste) in households considerably contributes to sustainability of the process of waste management. Even though such practice is not sufficiently present yet, certain activities have resulted in some advancement.

Planning as a base for successful waste management

“In its initial stage, the regional plan implies establishment of the “two bin” system for collection of dry and wet household waste, with the intent to introduce “the third bin”, for biodegradable waste only, as the following step”, says Bojan Batinić from SeSWA, Serbian Solid Waste Association, also assistant professor at the Faculty of Technical sciences in Novi Sad which conducted the research.

He adds that, having in mind that municipal waste contains large quantities of biodegradable waste, this segment may be used for production of compost. “Composting is the process of biological disintegration of organic substances in which, with assistance of microorganisms and in the presence of oxygen, compost is produced – stable material similar to humus”, explains Batinić.

Compost production is becoming an increasingly applicable solution for waste management and it presents an important factor for preservation of the environment of a community, while it may also have broader application. It may be sold to potential users as a soil conditioner, while compost of inferior quality may be used as covering material at landfills.

“The main advantage of compost is that composted materials may be used as soil conditioners, because they preserve most nutrients from the source material, thus they present an alternative to artificial fertilizers. If biodegradable waste ends at landfills, it causes generation of GHGs and leachate, thus having a negative impact onto the environment and human health. This issue is exceptionally evident in Serbia, where most waste is disposed of at non-sanitary landfills which do not have adequate environmental protection measures”, believes Bojan Batinić.

Both small and big solutions contribute 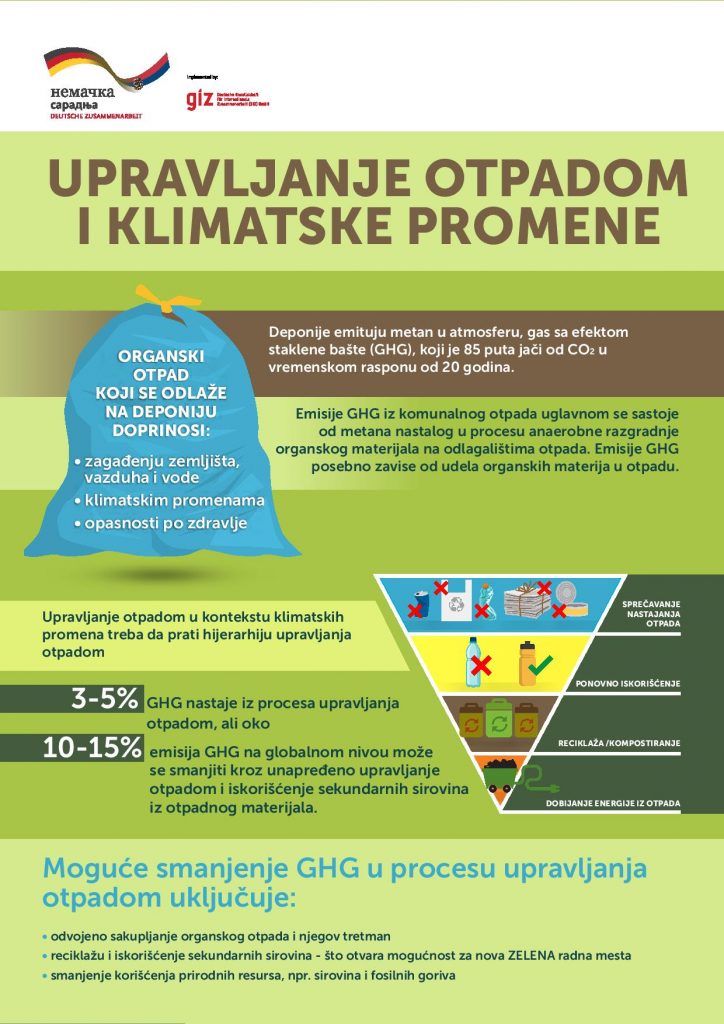 An important aspect of technical support to the Project is piloting of biodegradable waste treatment (composting process), which reduces generation of carbon-dioxide in the atmosphere and has impact on mitigation of the GHG effect and reduction of global warming.

Having in mind multiple benefits which the broader community and households may gain from the process, within cooperation with the Town of Novi Sad as the leading partner in the waste management region, designing of a pilot plant for treatment (composting) of green waste collected from public areas has been completed, while its construction is in preparation. This plant is being constructed within PUC “Zelenilo” Novi Sad and will be a part of the future regional waste management centre. The plant will treat green waste from public areas, such as garden waste – grass and branch clippings. Produced compost will be used for maintenance of public greeneries. Construction of the hangar for storing of finished compost and equipment has been completed, while the tender for construction of the composting field is underway.

“In this plant, it is planned to compost 5,000 tons of green waste a year which would otherwise end up at landfills. Composting of such waste at monthly level should amount to 417 tons, which would certainly contribute to reduction of carbon-dioxide emissions”, says Miloš Egić, Director of PUC “Gradsko zelenilo” from Novi Sad.

Beside this plant intended for larger quantities of biodegradable waste, the Project has also assisted implementation of a pilot household composting project in the municipality of Bački Petrovac. Household composting is performed by households, while compost may be used in own yards and gardens.

“In the end of 2018, citizens of the municipality of Bački Petrovac were distributed 100 boxes for home composting, while 40 more composting boxed were distributed as an addition due to a great deal of interest. Citizens also received manuals prepared by our Project, with detailed instructions on how to compost biodegradable waste generated in households”, says Maša Šašić, “Climate sensitive waste management (DKTI)” Project manager. She adds that in the course of 2019 professional teams comprising representatives of municipal administration and PUC “Progres“, with assistance of GIZ, monitored the process of home composting and provided advisory support to citizens. In the pilot stage, the quantity of generated compost amounted to about 85 cubic meters, or four trucks full of biodegradable waste which did not end up at the landfill.

These results indicate that, with consequent implementation of plans, composting may become a regular segment of waste management, and that it does not always call for large investments and plants, but that significant results may be also achieved at the level of individual households. Beside this, the response and interest on part of citizens indicate that such projects may also be implemented in other municipalities.