Support in strengthening of the Administrative Court

The agreement was signed by the Minister of Justice Maja Popović and the Deputy Director of the Good Governance Program Michael Engel, on behalf of the German-Serbian Development Cooperation. The signing was attended by the Ambassador of Germany to Serbia, Thomas Schieb. On the same occasion, two Memoranda of Understanding were signed: between the Administrative Court and GIZ and the Judicial Academy and GIZ.

This marks the start of activities that aim to strengthen capacities of the Administrative Court. Also, the cooperation looks to improve the availability of information on court decisions and work, to provide all citizens with effective and efficient protection in administrative disputes. As a first step on this road, an analysis of the current needs will be made and its findings will inform further reforms.

Since its establishment in 2010, Administrative Court has played an important role in exercising rights in administrative issues. Issues that often relate to daily lives of people: registration of a child in the birth register, issuance of a building permit, recognition of diplomas and many other topics.

The importance of the Administrative Court has been recognized by the Ministry of Justice as well as the need for the continuous learning and development in administrative procedure and dispute, which will be addressed by the support to the Judicial Academy.

In addition to the line ministry, the importance of the Administrative Court was recognized by the German Government, too, that continues to support Serbia in the area of good governance.

“This German-Serbian Development Cooperation Project continues the long-term support to Serbia in the field of good governance. Of particular importance in this regard are improvements in the rule of law, like in the administrative judiciary. Serbia has taken concrete steps towards an efficient and effective administrative judiciary and we are glad to be able to support our Serbian partners along this way,” said Thomas Schieb, German Ambassador. 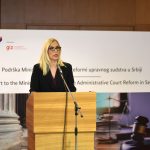 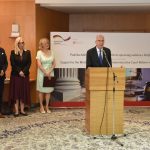 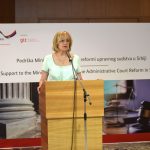 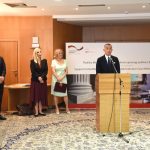