The Covid-19 pandemic has changed the way companies attract, recruit and retain employees, while teleworking has become the „new normal“. Finding employment and working therefore requires digital literacy more than ever, and according to the latest official data from 2018, around 50% of people over the age of 15 in Serbia are digitally illiterate. Data of this nature relating to members of vulnerable groups is not known, but given their economic and social situation, it can be assumed that these figures are significantly higher with regard to this population group in Serbia.

Due to difficult access to education and the labour market even under regular circumstances, members of vulnerable groups in Serbia, a significant number of whom are returnees, are at high risk of poverty. Young people and women are among the most disadvantaged among them. Unemployment is, among other things, the main reason for the lack of prospects and thus for labour migration.

Moreover, their lack of information and inactivity contribute to making it far more difficult for members of vulnerable groups to find employment, leading to social exclusion. Now their situation is exacerbated by the consequences of the coronavirus pandemic, which result in new employment being stopped or postponed for a longer period of time.

Public and private employment services play a crucial role in maintaining the labour market during the crisis and accelerating its recovery after the measures taken during the pandemic are lifted. Therefore, the aforementioned challenges were the focus of the first virtual employment fair in Serbia, organised by the National Employment Service (NES) and the German Information Centre for Migration, Training and Career (DIMAK) in May 2021.

DIMAK was established in 2016 as part of the global project „Migration for Development“ (PME), which is implemented in Serbia by GIZ on behalf of the German Federal Ministry for Economic Cooperation and Development (BMZ). The PME programme supports the economic and social reintegration of returnees into their home communities as well as the economic and social prospects for the local population through measures to increase qualifications and develop skills. DIMAK, in cooperation with the Ministry of Labour, Employment, Veterans and Social Affairs, the NES and the Commissariat for Refugees and Migration (KIRS), provides counselling for individuals and entire families. In addition, all information on current services and support measures is collected on the website Startfinder Serbia.

„During the initial activities of the fair, some people did not even have the desire to register for the fair because they did not want to work and were not interested in such an event. One of the reasons for the lack of interest was distrust of institutions. But after a certain period of time, during which we had intensively disseminated information about the fair in the target areas and referred them to DIMAK if necessary, interest grew. „As it went on, the most common obstacle was that most of the potential participants did not have an email address or a CV because they do not use this channel of communication“, says Milica Stanković, one of the four mobile team activists recruited by the PME programme. On the eve of the fair, they communicated with members of vulnerable groups of the local population, especially returnees and the Roma population, in Obrenovac, Valjevo and Doljevac, helping them to prepare no less than 70 CVs. Thanks to the commitment of the mobile teams, 136 people registered for the fair, including a total of 43 returnees and 17 women.

„My impressions of the fair are great. The participants are also very satisfied; they say that the information was very important for them and that the event itself was interesting for them because they did not have the opportunity to participate in something similar before“, shares her impressions Marija Vesić, also an activist of the mobile team.

On the eve of the fair, NES ran a media campaign at national and local level and DIMAK motivated potential participants, especially from vulnerable groups, through an intensive campaign on social networks. During the preparation for the fair, telephone support was also available to jobseekers, which was used by 55 people at only one of the points organised by the mobile teams. On the day of the fair, two collection points and information sessions were organised in Obrenovac and Valjevo, where 34 people, including 22 women and 7 returnees, received assistance in using all the services of the fair.

„Some participants did not manage to log in to the platform on their own at the first attempt, while some forgot their email addresses and passwords, or had other technical difficulties. We helped them with all this, as well as with finding job vacancies and attending webinars. For those who were interested in an interview with employers, I advised them on how to contact them, make a good impression and get an employment opportunity“, explains Marija Vesić.

The virtual employment fair was aimed at all unemployed people in Serbia. Over a period of six hours, it enabled 7,500 registered jobseekers, including 1,599 returnees, to communicate with 70 companies. During the fair, about 2,800 jobs were offered, 7,302 CVs were submitted, and 54% of the total registered participants were women.

All registered participants had the opportunity to speak live with employers, view employment offers, present their CVs and arrange working conditions. The fair offered a wide range of jobs from engineering, mechanical engineering, information and communication technologies to professions such as tailor, seamstress, salesperson, translator, production worker. Parallel to the main programme, participants could watch three webinars in the field of labour law, preparation for an interview and so-called green jobs. These presentations were attended by over 2,500 participants. 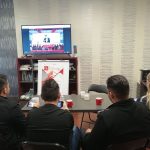 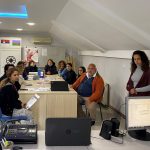 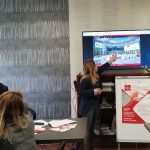 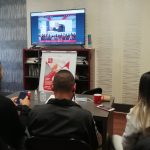